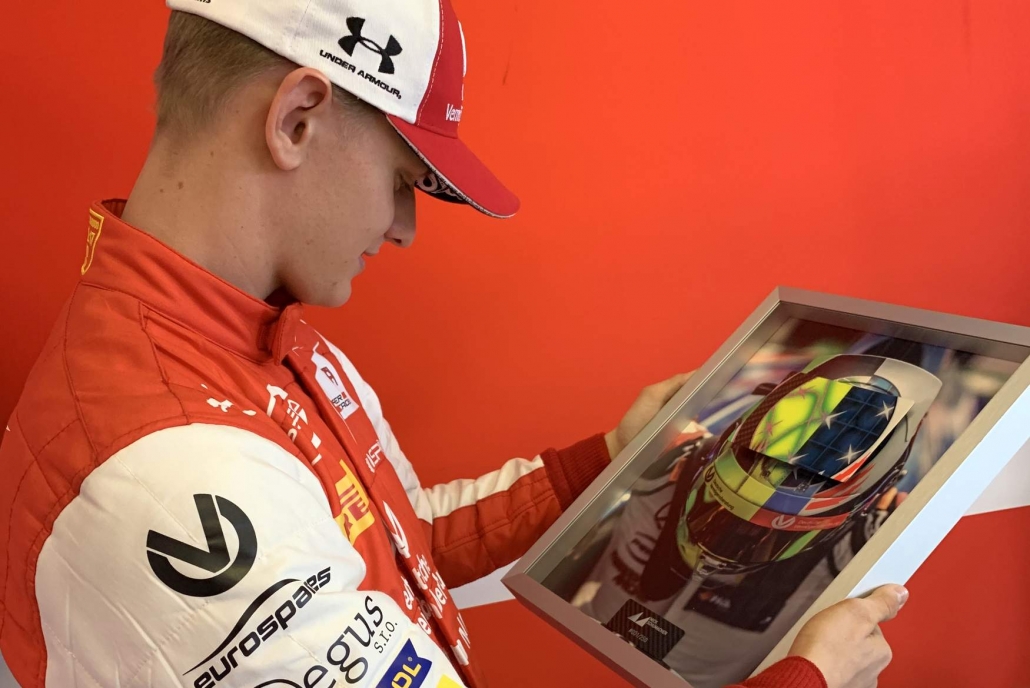 Michael Schumacher’s son, Mick finished 12th in his first season in the Formula 1 feeder series after winning the 2018 Formula 3 Championship. The 20-year-old’s helmet, painted by JMD, stood out as he battled at the sharp end of proceedings.

Now, the distinctive helmet – yellow and green livery coupled to the colours of the German flag on either side – has been immortalised by JMD by this unique collectable piece of art.

A halved Schubert helmet makes up the 3D centrepiece of a mural in the colours of the helmet Mick used during his first F2 campaign this year.

“We have new colours and have added the German flag which has a lot of history in the sport. It is also a kind of mix with my Dad’s old design,” explained young Schumacher of the helmet he wore this season including, to victory, in Hungary, his first win in F2.

The 3D-helmet artwork, which is strictly limited to 50 pieces, will be handcrafted by JMD upon receipt of order through the official Michael Schumacher online shop and Paddock Legends website. Each piece will be signed by Mick Schumacher. Delivery time from confirmation is three to four weeks.

This latest development follows on the heels of JMD’s release of Mick’s iconic split-design 3D-helmet artwork to commemorate the historic day he drove his father’s F1 Benetton B194 ahead of the 2017 Belgian Grand Prix at Spa-Francorchamps.

Along with these, Mick’s F2 season tribute helmet is now also available through the official Michael Schumacher online shop and the Paddock Legends online shop.

With a team of dedicated and passionate artists and specialists, JMD creates up to 600 helmet designs per year. This includes everything from concept through to hand-painting life-size helmets, as well as replicas, miniatures and collectables.

Jens Munser recalled his first F1 helmet assignment, “The first Formula 1 helmet I did was for Tora Takagi in 1998. He wanted a chrome-based design, which he could not get in Japan, so he asked me, two years later Nick Heidfeld came approaching me when he drove for Formula 3000. I designed the helmets for him throughout his career.”